For iPhone and iPad

Wrigley Rose, 25, editor of the Uptown Bulletin, decides to begin to take life more seriously and makes positive life affirmations. With the encouragement of her two best girlfriends, she ventures in search of her biological parents and a husband to begin a family of her own. She discovers that her positive life affirmations work as she finds three great but different guys to possibly settle down, plus, she finds a lead in her search for her birth parents.

The community has always loved her witty and humorous column. But suddenly, a slander law suit is slapped on the paper and her. When the three guys she thought she couldn’t live without and her job become tenuous, her life takes drastic turns she never could have imagined. Especially when she discovers mysterious information about her family. Wrigley is thrown into uncharted waters and life threatening danger.

No posts.
No posts.
Home
Subscribe to: Posts (Atom) 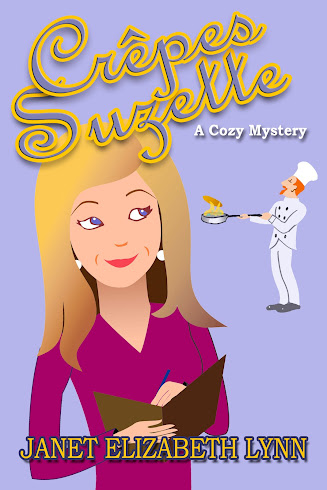 The idea for this book came to me many years ago. I was attending College and had a roommate who was in the process of searching for her biological family. She was unfortunate to have had a difficult childhood with her adoptive parents but fortunate to have found a wonderful relationship with her biological mother. She was in the process of finding her father when we graduated and went our separate ways. I hope she was successful.

Crêpes Suzette is a French dessert consisting of a crêpe with caramelized sugar and butter, tangerine or orange flavoring and, topped with liqueur served flambé.

There are several stories of origin of the dish. One story claims Crêpes Suzette was named in honor of a French actress Suzanne Reichnberg (1853-1924) who worked under the name of Suzette. In 1897 she was appearing in the play, Comédie Francaise in the role of a maid. During the program, she served crêpes on stage. Monsieur Joseph, owner of a restaurant providing the crêpes, decided to flambé the thin pancakes to attract the audience’s attention and keep the food warm for the actors eating them. Hence the name Crêpe Suzette.

I hope you enjoy this cozy mystery. This is the second Cozy mystery, Eggnog, a cozy mystery was released September 2011.